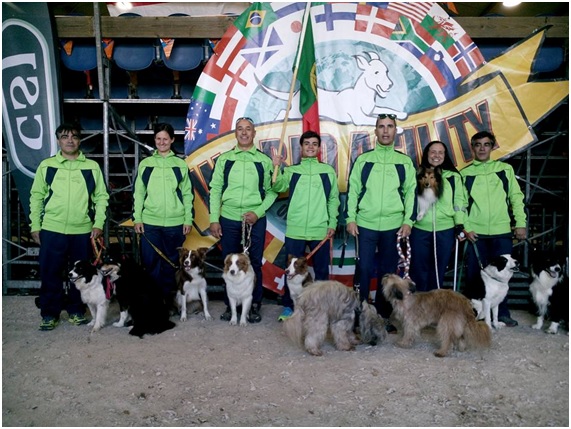 First time ever representing Portugal with Kaj! 🙂 He had to run in the highest category (on 65 cm), although he was measured under, because we were missing spots on the lower (55 cm) class. My good old boy was really shining on this weekend! 🙂

1st day
Snooker: 9th place, it went surprisingly good, never played it before and I found it complicated, but we almost collected max points…. Almost… But ran out of time (some hesitation at some points eheh) so the last 7 points we lost.
Penthatlon jumping 1: nice run with one bar (faults here are counted to time) 25th place
Penthatlon agility 1: a really promising run until we got a misunderstanding on number 14 got a refusal and ended up in a bit of chaos than finally elimination.
I really love the schedule, so nice never to be in a hurry and you can always see the other competitors from your country. Great venue and surface, really loving it!

2nd day
Super day for Kaj! 😀
2nd place in Gambler! First time I did it in my life and we truely enjoyed it!
5th place in biathlon jumping! Not bad for my nine years old boy! 😉
Fourth best time in penthatlon agility 2 run, but a fault on seesaw, but Still finished on 11th place! 🙂
Penthatlon jumping He knocked the first bar so i kind of give up, but super Happy and satisfied with my boy! :):):)

3rd day
Last day of WAO didn´t end as I planned… We had only the biathlon agility to run and as we were placed 5th in jumping it was even a nice chance… But I fall after the second jump (don´t ask me how) I got up fast and continued without getting any fault for it, but later on collected a refusal and of course we lost time… Well things like that can happen… But the spectators loved our show and just loved Kaj’s running contacts! 😉
Apart from that Kaj was placed 4th in total of the games after USA and two Canadias, super proud on my boy who did games the first time ever (me too:):)! :):):)
Huge thanks to all the portuguese team for making me feel like not simply part of the Team, but as part of the ‘family’ and supporting me! Obrigada para todos! 🙂 Zsuzsa Veres is a Hungarian vet, veterinary chiropractor and agility athlete since 1997 and also a professional agility dog trainer since 2003. She developed her own methods to get a better relationship with your dogs, improving health and happiness by mixing some funny and challenging new exercises.